Cabarita Beach/Bogangar
How and Why 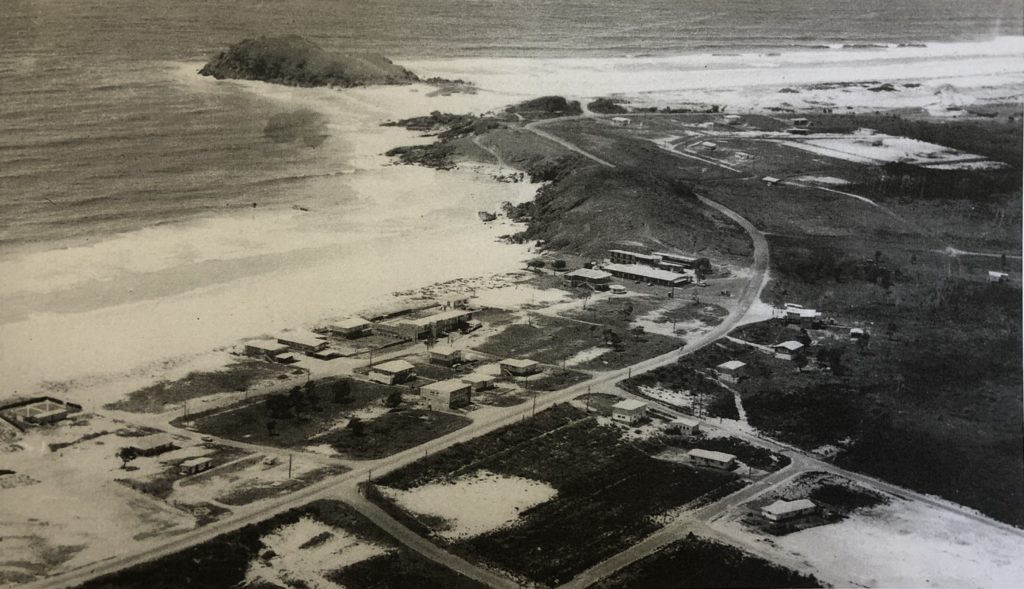 “I came across a rise at Bogangar. It was the most beautiful sight I had ever seen. I still remember that I sat in the saddle, spellbound at the scene, before me. Not a house or a road to be seen. Just natural untouched beauty.”

Bogangar is generally thought to be the indigenous term for ‘a place of may pippies’ and the tiny mollusc certainly was once found in abundance along the shoreline. But some believe it may have derived from Bobingah, meaning a headland. Another educated guess is that its origin was the Minjungbal name Bagugunn, or Boogoolum meaning Grass Trees Along the Ridge, perhaps referring to the natural feature now known as Norries Headland.

Today’s popular seaside resort was short on European history before the dawn of the twentieth century. In fact, its actual existence rarely found space in print. In 1885 there was talk of petitioning the Minister for Works for a trial survey of a railway from the Brunswick River to the Tweed, running between Lake Bogingar and Duranbah. Later in the same year, it was announced that a gold mine started up but subsequently failed at Boggungar Lake.

In the first decades of the new century, little had changed in terms of public awareness. Bogangar, assuredly, was not on everyone’s lips but some adventurous travellers were finding their way to it. A press report in 1916 gave the place a complimentary assessment, lauding its rich variety of flora.

A bridge across Cudgen Creek began to be built in 1919 but more than a year would pass before its completion. Rather curiously, when the structure was finally finished, it would be years before anything resembling a road would be laid on the creek’s southern side other than a short stretch leading to a saw mill. Easy access to Bogangar was years away. Such tribulations, however, were not enough to discourage the enthusiast. In 1917, the Tweed Daily suggested the holiday-maker visit Bogganba Beach.

The first European to recognise the farming potential of Bogangar was possibly a member of the pioneering Murnane family. Cornelius Vincent (Con) Murnane purchased 800 acres in 1909, two years after his sister, Maggie, settled in neighbouring Cudgera Headland. Research has revealed some land clearing by Con, but there is no record of him ever living on his holding. The first non-indigenous resident was probably Josiah (Josh) Moseley who selected 44 acres on the beachfront in 1920, and lived there with his wife Christina, raising goats and growing pineapples. A small portion of their land was resumed for a proposed road from Cudgen to Norries Headland. The Moseleys would soon be joined by Jim Cooley who bought a large parcel of land from Con Murnane and established a dairy farm.

For several decades, the Cooleys were the sole residents of Bogangar, the Moseleys having departed at the end of the 1920s. Jim’s daughter Sis Everingham, with her husband Horrie, set up a kiosk in a caravan parked by the beach. The business operated mainly on weekends, catering for fishermen camped nearby. Then came the sand miners the clang and clatter of their industry disturbing the Cooley’s peaceful domain. The visual changes were no less marked. The gentle contours of the sand dunes were flattened and native vegetation vanished in the wake of the onslaught on the landscape. On the other hand, sandmining provided a huge boost in employment to largely impoverished farming communities along the Tweed Coast.

A road and bridgeworks, carried out by the mining companies, put Bogangar within easier reach and there were some who saw its potential to attract visitors and ultimately residents. After all, it boasted a magnificent beach, a reputation for excellent fishing and the scenic splendour of the iconic Norries Headland.

Neville Cooley and Bill Roberts had shown interest in developing the old Moseley farm and named the strip of land, adjacent to the beach, Ocean View Estate. John Booker, a well-established builder and developer, also recognised opportunities for dramatic growth in the area. He bought the land Cooley and Roberts had been promoting plus a large section of the Cooley’s farm. Booker called his acquisition, The Cabarita Country Club Estate, and in 1960 built, as its centrepiece, the Cabarita Country Club Hotel Motel. It opened its doors in December that year as did Johansen’s general store and the fledgling Cabarita Beach Surf Lifesaving Club. The seeds of a future village had been sown.

A modest collection of buildings appeared on the eastern side of Bogangar including Hewitt Court, a beachside motel opened by Bob and Monica Hewitt. Cabavilla holiday flats offered further accommodation. Awareness of Bogangar was growing but there was little reason to expect rapid changes to the village. Public utilities, taken for granted in the bigger centres, were either inadequate or entirely missing. Town water, for example, did not reach Bogangar until 1963 although a few buildings were connected to the reservoir built by John Booker for his hotel.

Water, was one thing, roads were another. The one from Kingscliff was known as the horror stretch, so bad was its surface. But at least it was navigable whereas the village had no access from the west where 1½ miles of swamp separated Clothiers Creek from the nascent village.

Yet progress although slow, edged forward. A café opened opposite the hotel and Phil Bonnor operated a real estate office on the Coast Road next to Johansen’s store. By 1962, 120 blocks in John Booker’s Cabarita Country Club Estate had been sold and Reg Pye and Frank Pearson opened two shops, one selling plumbing supplies and the other supplying refreshments and general merchandise. The venture was relatively short lived.

In September, 1962, Ken and Marie Hansen opened Australia’s first jet boat water ski school, at Cudgen Lake, the precursor of the Cabarita Gardens Lake Resort. They had earlier established a caravan park on the corner of Cypress Crescent and the Coast Road. Ken, a builder by trade, built and sold many of the village’s early dwellings and several shops in Hastings Road. A second storey was added to the café building and Nick’s restaurant offered fine dining.

Bogangar’s status as an established village was further confirmed by the official opening of the Cabarita Beach Bowling Club in 1963, following strenuous efforts by a dedicated band of locals. That year a rough corduroyed (surfaced with tree trunks) track through swampland allowed vehicular access from Clothiers Creek and beyond with a resultant growth in visitors. The remainder of the 1960s saw little change in Bogangar. There was the pub, a small general store, a café, a somewhat ambitious restaurant, a bowling club, a lifesaving club a developing tourist complex at Cudgen Lake, the Cabarita Beach Pony Club established in 1963 and a gradual increase in housing and a tiny community perfectly content with the laid-back piece of turf they had chosen for their home. The 1970s were pretty much the same. Still no public transport, still just one shop. But the decade did not pass without several significant happenings. In 1974 Geoff Bell purchased 1100 acres on the outskirts of the village for his ambitious Tanglewood tourist and residential project. The following year the scouting movement developed Camp Wollumbin and the Cabarita Beach Lions Club was formed.

The next decade was more eventful. Shops opened on the eastern side of the Coast Road and in Hastings Road too. Among the new businesses and services were a pharmacy and doctor’s surgery, a self-catered grocery store, a laundrette, a service station, a hardware store and a Chinese restaurant. Not far up the road, the Tweed Coast Raiders established a clubhouse and playing field.

By 1990 it was obvious that Bogangar had a promising future as a popular coastal village. By this time Bogangar, had almost given way to Cabarita Beach in the local lingo and efforts by the Cabarita Beach Tourist and Progress Association finally succeeded in having the latter name formally recognised as a neighbourhood within the village of Bogangar. The neighbourhood is located on the eastern side of Tweed Coast Road. The community was divided over the issue and the dispute became quite vocal with the naming of Bogangar Public School.

The Cabarita Beach Neighbourhood might never have eventuated had the Tweed Shire Council not taken a stand in 1980 against the state government’s Coastal Protection Act which aimed to prevent further development within 150 metres of the beach.

Despite Bogangar’s transformation from a sleepy coastal backwater, it remains surrounded by ocean and the Cudgen Nature Reserve. Consequently, it cannot expand laterally and is likely to retain its compact village image into the foreseeable future.

Extracted from The Concise Guide to Tweed History, The Tweed Coast and Hinterland 2019 by David Rae